Modern combat vehicles have a formidable capability to keep going, even in impossibly difficult terrain. Still, they sometimes just grind to a halt, perhaps being stuck in snow or mud, or because of a breakdown or technical fault with the vehicles.

Situations such as these call for material with the ability to extract a stranded vehicle or get a broken-down vehicle towed or carried to a workshop facility for repairs. And, with the modern combat vehicles putting on ever more weight, the recovery vehicles need correspondingly more muscle as well.

The Norwegian Army operates 40 LEOPARD 2 A4NO main battle tanks, and with a weight of some 55 tonnes, some seriously powerful material is needed to extract such a vehicle when it is bedded down. The Army is also relying on the recovery material working well even in combat situations, through the recovery vehicles being armoured and protected on a par with the vehicles they are assisting. This is why the Norwegian Army has recently procured six WiSENT 2 ARV (Armoured Recovery Vehicle) with the primary task of being a kind of rescue vehicle for embedded or broken-down armoured vehicles.

What is more, the Norwegian MoD contracted six units of the WiSENT 2 AEV (Armoured Engineer Vehicle), with the main task of supporting and serving the Army’s armoured vehicles, as well as the Army’s other vehicles and personnel.

The WiSENT 2 ARV (Armoured Recovery Vehicle) weighs 63.5 tonnes. It is the heaviest land vehicle in the Norwegian Army and about 20 tonnes heavier than the old NM217 recovery vehicles. The WiSENT 2 ARV vehicle has a crane with a lifting capacity of 32 tonnes, and a winch with a pulling force of 40 tonnes. This means that the vehicle can lift the turret or the engine off a LEOPARD 2 main battle tank or pull the whole thing along. For lighter rescue missions, the WiSENT 2 sports an auxiliary winch with a lifting/pulling power of 2.7 tonnes, working through 260 metres of wire.

These vehicles also have a Combat Recovery System enabling them to hitch on to an incapacitated vehicle under battened hatches, which means that the crew can rescue the troubled vehicle without even leaving the comfort of the WiSENT 2. This is realised, among other things, with a rear-facing camera making it possible to back up to a vehicle to attach a hook remotely. On the NM217 vehicles, the crew needs to leave the vehicle to execute this task, while the newer vehicle lets them do this while still protected by being inside their own vehicle. For the crew, this naturally means a new level of safety when the WiSENT 2 ARV is tasked with recovering a stranded battle vehicle from a position far out on the battlefield. The cameras also have a thermal capacity, enabling the vehicles to operate with battened hatches both in daylight and darkness.

“To date, Norway has taken delivery of five of the total of six WiSENT 2 ARV vehicles, and our experiences with them has so far been nothing but positive”, says Major Cato Berg, the Project Manager for Norwegian WiSENT 2. “In addition to training and practice, we have also used the vehicles in summer and winter exercises, at home as well as abroad, including together with other NATO Member States. Our new WiSENT 2 ARV’s have functioned in a very satisfactory manner. We have also conducted mobility testing, and even in most demanding terrain, the WiSENT 2 has demonstrated the same mobility and agility as the Leopard 2 main battle tanks”, Berg further highlighted.

While the Norwegian Army now has taken delivery of five of the total of six ARV’s, the first of the six WiSENT 2 AEVs are expected to arrive by Christmas this year.
Like the ARV, WiSENT 2 AEV is based on a LEOPARD 2 chassis and has a full armour to allow the vehicles operate in a combat zone.

The main task for the armoured engineering vehicles is to remove obstacles and establish negotiability for Army battle tanks and other vehicles. In addition, the vehicles may be tasked with various other field jobs such as digging trenches, levelling terrain in a base camp area, performing extractions and establishing battle positions. AEVs can also be used to deploy obstacles to hinder enemy vehicles’ progress.

The AEV vehicles are equipped for digging, dozing and ripping of different types land masses/soils to let tanks and vehicles negotiate or circumvent obstacles.

The armoured engineering vehicle has an excavator arm mounted instead of an crane arm and a more advanced dozing blade where you can adjust the angle of attack (pitch) and the sideways cut angle on the horizontal plane. The armoured engineering vehicle can be used as a penetrating armoured vehicle using a mine breaching plough to replace the dozer blade, as well as a tagging system for marking mine field pathways. 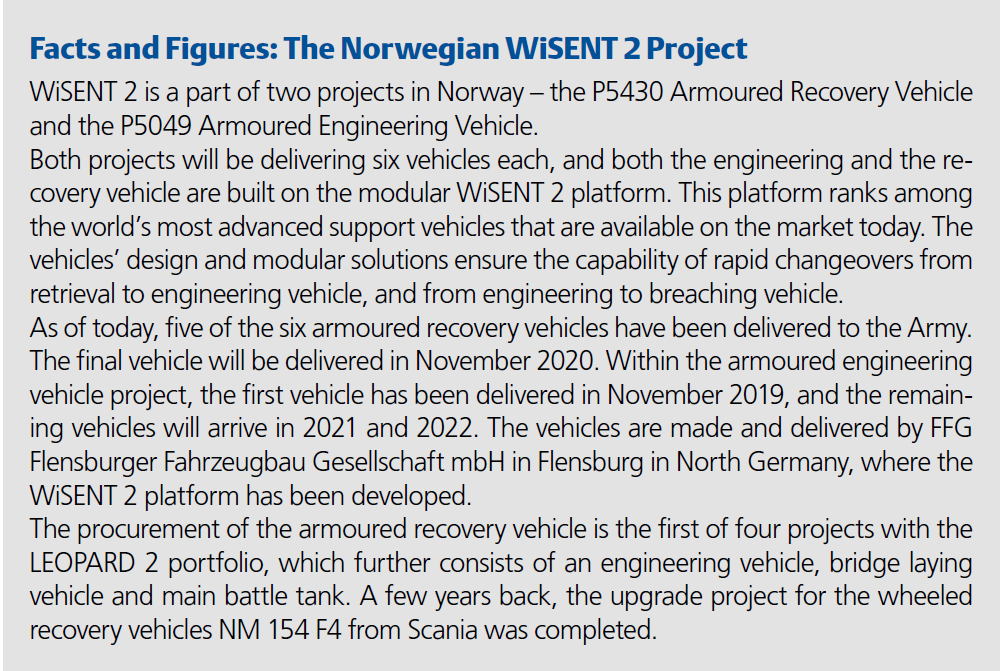 The Norwegian Army will, at the outset, be operating the WiSENT 2 in its ARV and AEV configurations. However, the vehicles’ design and modular solutions offer the capability of rapid changeovers from retrieval to engineering roles, and from engineering to breaching, according to the changing operational needs.

Furthermore, the crane arm on the ARV may be exchanged for an excavating arm, for example, or a mine plough or other equipment may be attached.

Quick couplings enable automatic tool change on the digging arm, even while in the field.
Both the WiSENT 2 ARV and the AEV have a crew of three: a commander, driver and operator/gunner.

Having the WiSENT 2 built on the LEOPARD 2 battle tank chassis contributes to simpler technical and economical logistics. The armoured vehicle, like the LEOPARD itself, is constructed along a modular principle, whereby the main components are replaceable in a short time. For example, both the engine and the hydraulics package can be replaced as individual parts.

The WiSENT 2 vehicles come with a command and control system (Integrated Combat Solution) from Kongsberg. The system offers the vehicle crew enhanced situational awareness, as well as the possibility of co-operating with the army’s new CV90 armoured combat vehicles.

For their own protection, the new vehicles will be armed with Kongsberg Nordic + Remote controlled weapons stations with a 12.7mm machine gun. In comparison, the old NM217 vehicles use a mounted 7.62mm machine gun, which needs to be operated manually. The crew can also use the sensors of the weapons station to get a better image of the surrounding situation. This is then information that the crew can share with other units and other vehicles. In a similar manner, the WiSENT 2 is, of course, able to receive such information from other units.

The vehicles also have a camera system from Kappa, enabling the vehicles to operate with battened hatches both in daylight, smoke and darkness. The cameras also reduce the danger of road accidents.

The WiSENT 2 platform has integrated ballistic armour to Level 5, and mine protection to level 4, according to the NATO STANAG 4569. Additional protection can also be attached where needed.

For the purpose of reducing noise, engine wear and fuel consumption, the WiSENT 2 is supplied with an ‘Auxiliary Power Booster’.This is a system based on lithium battery technology, which provides the vehicles with a so-called ‘silent watch’ capability with an operating time of up to eight hours without running the main engines.

In the development and production of military vehicles, time is not only money, but also relative. Years pass from the idea to the first deployment. In turn, vehicles are in service for decades before they need repairs and upgrades.

“The security landscape is rapidly changing.”