Start Allgemein How Much Has Russia Militarised the Crimea?

At the sidelines of the January meeting of the Forum for Security Co-operation (FCS) of the Vienna-based OSCE (Organisation for Security Co-operation in Europe), a document has been circulating that illustrates the rapid growth of Russian units and weapon systems on the annexed Crimean Peninsula. ESD has obtained the 20-page document but has been unable to verify its authorship.

Regardless of how accurate the numbers are, it shows how Russia, in violation of international treaties, has transformed this once thriving resort into a modern military base and even prepared it for the deployment of nuclear weapons. It is assumed that the latter in particular are meant when the document states that Russia continues to station various weapons systems, equipment, and ammunition on the occupied territory in flagrant violation of relevant international legal obligations.
In 2020, the Joint Task Force (JTF) of the Russian armed forces in occupied Crimea consists of 31,500 soldiers – considerably more than before the occupation of Crimea (which were there mainly because of the Russian Black Sea Fleet). The source estimates that the number of Russian troops will increase 1.5 times by 2025. Russian troops are made up of three main components – land, air and naval forces, which allows Moscow to conduct comprehensive military operations, in the southwest, the sea and coastal areas, the airspace over the Azov and Black Seas, and down to the Mediterranean.

Anti-Access / Area Denial Tools
These terms may have become a military fashion, but in this case they adequately describe how Russia wants to keep competitors or potential opponents away from Crimea. The Russian occupation forces have created a multi-stage anti-aircraft/ missile system over and around the peninsula. To increase its efficiency, Russia has upgraded its ground-based air defence regiments with the new S-400 TRIUMF systems and plans to supply other units with medium-range systems of the type BUK-2, TOR-2 and PANTSIR. These systems will also increase combat capabilities up to 300 to 400 km to reach targets outside the Crimea, including southern Ukraine. Since December 2018, they are reportedly supported by the deployment of the BASTION-P 3K55 anti-ship missile systems and the BAL 3K60 anti-ship cruise missile. The latter are stationed about 10 km inland and are also reported to be deployed near the Kerch Strait and around the newly built Russian bridge to the Crimea. The bridge has been criticised as a unilateral step and as a breach of international maritime law, as it restricts maritime traffic to and from the Sea of Azov by limiting the passage of ships to a height of 35, a width of 31 and a draught of 8 metres. Following protracted negotiations, Russia has released the crews of the Ukrainian naval tugboat JANA KAPU and two small armoured artillery boats that were rammed and detained on their way to the Ukrainian port of Mariupol in November 2018. According to Ukrainian diplomatic staff, Russia also returned the three ships but they were completely devastated inside, with all the instrumentation and electronic equipment of the bridges torn out – right down to the toilets and faucets. This chapter of the document concludes with assessments of how the Russian side might easily increase its Crimea-based combat capabilities in a possible future conflict by deploying its tactical SRBM systems ISKANDER and ship-based KALIBR SS-N-27 cruise missiles of the type SS-N-27 with a range of up to 1500 km. 25 RN ships and submarines will receive KALIBR until 2025. Also mentioned are some “special warheads” having a range of 2600 km.

The document claims that there is evidence that air and sea-based means of delivering nuclear weapons have been moved from Russia to Crimea, while the old Soviet-era storage infrastructure near Feodosiya and Sevastopol are allegedly being renovated. Corresponding sheets point to the facilities “Property 76” (Feodosija 13) as well as “Property” -100, 221 and 825, and the Baherove airfield near Kerch. It should be recalled that the Russian Federation unilaterally denounced the 1997 Agreement with Ukraine on the status of the Black Sea Fleet. According to Article 5 of this Agreement, “the Russian Federation undertakes not to possess nuclear weapons in the Black Sea Fleet of the Russian Federation stationed on the territory of Ukraine”. Moscow may now stress that Crimea is no longer part of Ukraine. Nevertheless, given the geopolitical location of Crimea, the deployment of nuclear forces there is a serious challenge to the international non-proliferation regime and should receive an appropriate response from the international community. The document criticises the lack of such an answer. Russia has already deployed various carrier-systems and other means capable to deliver nuclear weapons to Crimea. Among them are the cruiser MOSKVA with its VULKAN missile-system, the guided missile escort ship SMETLIVY with the launch system RASTRUB-B, and a Su-24M bomber unit which can carry tactical nukes. Other VKS aviation assets who already have deployed to Crimea for training purposes included Tu-22M3 medium-range bombers and Su-34 tactical long-range strikers. The document also refers to experts who claim that Russia will resume operation of the research reactor “DR-100” with low-enriched uranium (LEU) of the National University of Nuclear Energy and Industry in Sevastopol. It is noted that Russia’s attempts to take control of nuclear facilities and materials in the Crimean Peninsula are contrary to international law and the IAEA Statute and pose a serious threat to the international non-proliferation regime.

Officially, Russia has never commented on its nuclear activities in Crimea, but it does not hide its conventional reconstruction efforts. A 2018 TASS publication referred to a statement by Defence Minister Sergey Shoigu: “The Crimean troop force was established not only to defend Russia’s interests on the peninsula and in the Crimean Federal District, but is also capable of performing tasks in the Black Sea offshore zone.” As the Minister noted, after 2014, as part of a program to send a self-sufficient group of troops to the Crimea, almost 100 units and organisations have been created. According to Shoigu, “By order of the President, we have been instructed to station a self-sufficient combined force group in Crimea, capable of effectively protecting Russia’s interests in the area. This task was accomplished. A report to that effect was submitted to the commander-in-chief. 96 units and organisations were formed. In addition, we have now organised the complete combat training of the Crimean Group Air Force, the operational strength of the air defence forces has been increased. The construction of new facilities in five military towns on the peninsula is also continuing, and other buildings are undergoing repairs.” In January 2020, Russian President Vladimir Putin observed on television a massive military exercise off the coast of the disputed Crimea. While on board the RN cruiser MARSHAL USTINOV the commander-in-chief observed the KALIBR cruise launched by ships and two MiG-31K launched KINZHAL hypersonic missiles heading for their distant training targets. 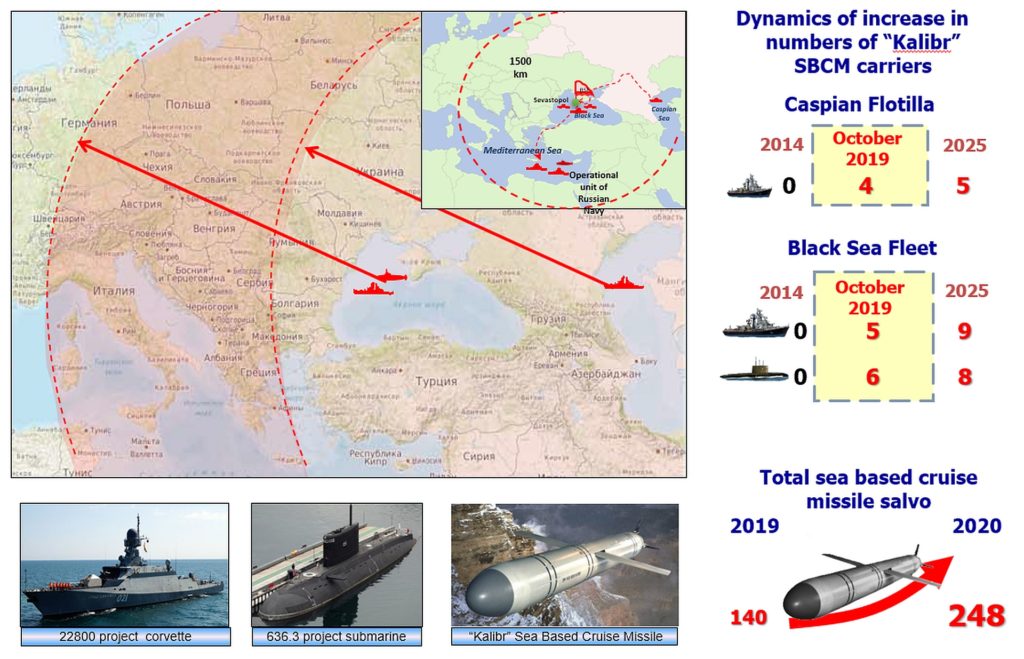 When Russia is criticised for its civilian and military actions in Crimea, it repeatedly points to the – internationally unrecognised – plebiscite of March 2014, according to which 96% of the 83% of Crimea’s inhabitants voted in favour of joining Russia. Without naming any sources, the document now quotes surveys from November 2019, according to which 65.8% of Crimean citizens and 67.3% of citizens of Sevastopol would be dissatisfied with their economic and general living conditions. For example, 82.2% of respondents are dissatisfied with the increase in prices of goods and services in Crimea. 66.0% of respondents said that they are dissatisfied with low incomes. As for medical services, almost the same figures can be observed throughout Crimea – 45.8% and -49.5% in the city of Sevastopol. 44.8% of respondents said that corruption and bribery are the main problems in Crimea, while 24% of respondents described these two phenomena as the worst in the city of Sevastopol. In general, an increase in the prices of goods and services, low income levels, insufficient medicine, and corruption and bribery are cited as key problems in everyday life on the peninsula. And 31.3% and 26.3% of respondents respectively said that the situation had only worsened between June and November 2019.

Author: Georg Mader is a defence correspondent and freelance aerospace
journalist based in Vienna, Austria, and a regular contributor to ESD.

The Agency for Defense Development (ADD) joined with what is today Hanwha Defense, to develop the K9 artillery system. This was followed by the provision of support vehicles for the artillery system, these include the K10 ammunition resupply vehicle that carries 104 rounds and 504 charges for rapid transfer to the K9 gun, and the K77 fire direction centre acting as a battery command post for the K9.

VINCORION with its long history in the defense and aviation industry and wide range of competencies in power generation and the management of electrical power is a company that offers its solutions to OEMs and governments.

“The world will not become a more peace- ful place without our air defence systems.” – The Swiss Defence Industry