Meteksan Savunma is the one of the leading defence companies in Turkey. Established in 2006, Meteksan Savunma is known for providing sensor systems, communication systems, underwater acoustic systems and platform simulators. It is also part of Bilkent Holding, a large conglomerate funded by Bilkent University, which is Turkey’s 15th largest industrial group, and privately held. The company is one of the main suppliers of the Turkish Armed Forces, and has been involved in various projects such as missile defence systems, attack helicopters, UAVs, corvettes and underwater weapons systems. ESD had the opportunity to talk to Selçuk Kerem Alparslan, President of Meteksan Savunma.

ESD: When and with what objectives was Meteksan founded? In which technology segments is the company active?
Alparslan: Meteksan Defence Industry Inc. was established in 2006 to develop and produce high technology products and subsystems for the Turkish and foreign armed forces. The systems and subsystems we produce are used for command and control, communications, reconnaissance, surveillance and intelligence purposes, and they apply to several different platforms, especially for surface and underwater platforms, helicopters, unmanned aerial vehicles (UAV) and missile systems. Our company operates in six fields: radar systems; perimeter surveillance systems; laser and electro-optic systems; communication systems; underwater acoustic systems; and platform simulators. Within these areas, we have completed various projects both in Turkey and in other countries, such as ground surveillance radars, missile data links, hull-mounted sonars, naval training simulators, which are all fulfilling the costs, schedules and performance expectations of our customers.

ESD: Meteksan develops several high technology systems for UAVs. Could you please provide us with information about your activities regarding UAV platforms?
Alparslan: As you have mentioned, Meteksan develops several mission critical subsystems for UAV platforms. All our products have been tested and readied in the field and each holds an assertive and competitive position in the global market. We believe that our solutions meet the needs of UAV platform manufacturers as they are high technology systems that also offer best value with low ownership costs compared to leading competitors. For example, one of our products is called the MILSAR UAV SAR/GMTI radar that allows UAVs to continue to provide high-resolution wide area images even in disadvantaged weather conditions where electro-optic sensors are ineffective. This high technology radar system has the same form-fit mechanical interfaces as the standard 15” EO/IR sensor turret to be readily replaced with an EO/IR sensor. In addition, operating MILSAR, together with an EO/IR sensor in a “slew-to-cue” fashion, improves the effectiveness of UAV-UCAV joint operations through maximizing wide area surveillance of the UAV and by increasing the UCAV’s attack capability.

As you may know, approximately 50% of all UAV losses are experienced during the take-off and landing phases. The OKIS automatic take-off and landing system we developed, based on cooperative radar technology, ensures the safe take-off and landing of UAVs within GPS denied conditions. The airborne unit of OKIS is small in size and weight and can be used in almost any kind of UAV without having any significant degradation on payload capacity. On the other hand, the OKIS ground unit provides for safe and precise take-off/landing by feeding accurate 3D position information (range, bearing, elevation) of the UAV to the Ground Control Station (GCS). Therefore, the GCS can communicate the precise location of the UAV with the autopilot via a communication link.

Jamming GNSS signals may cause many platforms to fail in their mission. For this reason, the development of GNSS anti-jamming systems and sustaining the performance of the military platforms in jamming environments is a crucial task. In that respect, we recently introduced a multi constellation, multi band anti-jamming GNSS which suppresses jammer signals targeting the Global Positioning Systems of the UAV and missile platforms. It is a very lightweight product that can be used in any kind of UAV platform.

Additionally, our company is the supplier of high precision 2,500 ft and 5,000 ft radar altimeters, telemetry transmitters and flight control computers according to the requirements of UAV companies. Some of these subsystems are already being used in Turkey’s leading platforms and projects with great success, as well as by certain international users.

ESD: Meteksan also works very closely with Turkish missile manufacturers and is responsible mainly for the data links of missile platforms. What are your company’s main products inside the missile systems?
Alparslan: Missile technologies are rapidly improving and becoming more sophisticated and complex with increasing requirements for greater reliability, accuracy and capability.

ESD: Turkey signed an important contract last year to supply four corvettes to the Pakistan Navy and Meteksan is responsible for the hull mounted sonar systems in these vessels and also for the Turkish Navy’s MILGEM class corvettes. Could you explain your projects for naval platforms?
Alparslan: Meteksan Defence was designated as Turkey’s “Centre of Excellence in Underwater Acoustics” in the field of underwater acoustic systems, which adds significant value to the naval platforms with advanced technologies in underwater acoustic sonar systems. Our YAKAMOS Hull Mounted Sonar System is a medium frequency, surface ship anti-submarine warfare and obstacle avoidance sonar, which is designed for the surveillance of the underwater environment to automatically detect and track underwater targets such as submarines, surface ships and torpedoes. The system has been used in the MİLGEM class corvettes since 2011 and was selected as the sonar system of the Pakistan Navy’s corvette programme in 2019.

Meteksan recently successfully delivered another project to the Turkish Navy named ALACA; this is used to measure the radar cross section (RCS) of surface ships. RCS is an important parameter in the protection of naval forces’ command combat platforms from fire control radars and guided missile seeker radars that can be found in hostile platforms.

ALACA performs high accuracy RCS measurements so that the relevant EW measures can be applied to improve the millimetre wave radar cross sectional areas of existing or newly designed platforms and to determine the operational scenario of electronic warfare counter measures such as chaff and decoys. 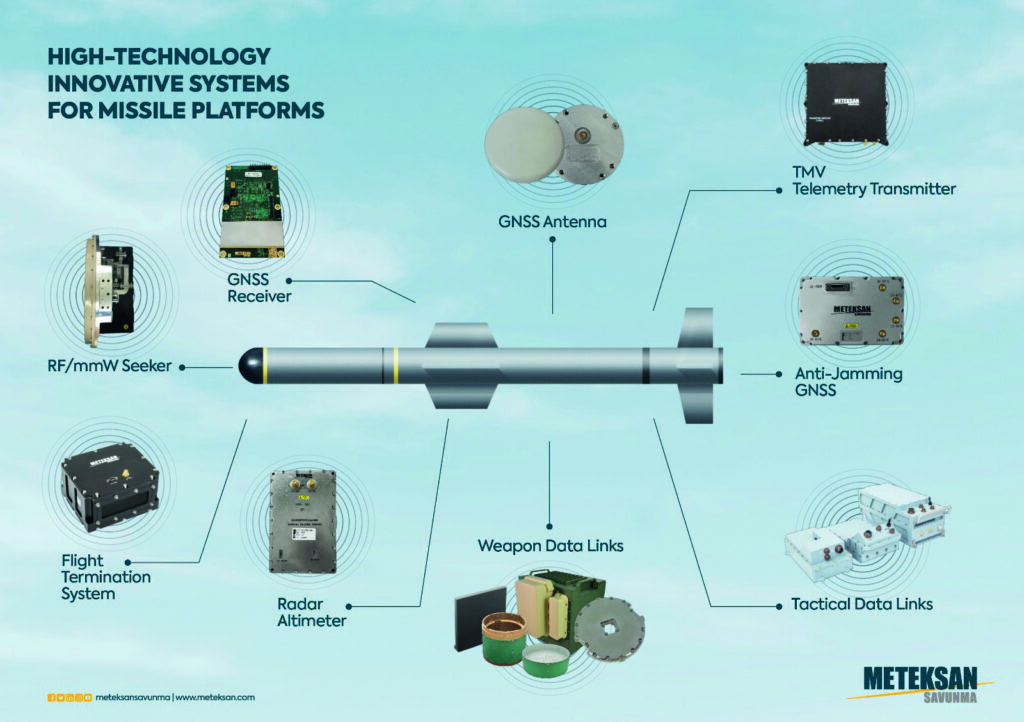 ESD: Turkey’s unique geographical location has a strategic role between Europe and Asia but also serves as a transit country for migrants and refugees. Meteksan is instrumental in protecting Turkey’s borders with advanced technologies. Can you tell us anything about that?
Alparslan: Borders are regions where measures should be taken within an absolutely integrated security solution regarding terrorist activities and also illegal crossings. Border security is achieved by bringing together as many different security components as possible, such as border fences, observation towers, mobile observation platforms, unmanned aerial vehicles, and balloons, but one of the most critical components is the radar systems being used. We are very proud of our Retinar Perimeter Surveillance Radar family, which are currently operational in the border areas of Turkey and other countries.

For example, a large airport in Europe is using our radar system for its perimeter surveillance. Retinar radar systems are completely developed by our company and they are high resolution advanced technology radar systems with low power consumption and low probability of intercept, operating in millimetre wavelength and optimised for human detection and recognition. These radars are developed not only for border surveillance but also for perimeter security of critical facilities and security of patrolling mobile personnel.

Retinar radars also generate the micro-doppler signature of the target and provide classification information whether it is vehicle, human or animal with spectrogram analysis which I believe is very important for users. I should add that we have important capabilities in the design and production of advanced and unique military radar solutions to our customers based on radio frequency (RF) technology. The abilities we have gained in millimetre wave radar technology since the foundation of our company, has allowed us to design and develop system components in this field and establish a design and test infrastructure as well. With the knowledge and experience we have gained in RF microwave and millimetre wave technologies, we are developing and producing different radar systems and are ready for cooperation with European companies for potential international opportunities.

ESD: Last but not least, the new drones are used not only for surveillance but also for air strikes. Technologies for drone defence still needs to be developed, so can you inform us about the latest developments?
Alparslan: The first step in acquiring counter-drone technology is the development of a sensor system that can detect, identify, locate, and track the converging drone. Relying on visual observation to detect drones is very ineffective; at a distance of several hundred feet, drones become invisible to the naked eye and very difficult to search with camera systems. Radar technology should be the main sensor of a counter-drone system as they can detect all types of drones, even non-communicating mini/micro UAV threats and non-GPS driven drones. Our Retinar FAR-AD, which is a perimeter surveillance radar especially developed to detect mini/micro UAV threats, is a new generation radar system with advanced drone detection, classification and tracking technologies. We are using Retinar FAR-AD Drone Detection Radar together with electro-optic sensors and drone jammers in our KAPAN Anti-Drone System. Different sensors and countermeasure components can be mounted on a vehicle or a mast, or it is also possible to integrate each component in different amounts according to the requirements of the area. In this way, effective solutions can be achieved both in terms of performance and cost. I believe the KAPAN Anti-Drone System is one of the best systems on the international market able to counter drone threats.

The interview was conducted by Korhan Özkilinc.

In the development and production of military vehicles, time is not only money, but also relative. Years pass from the idea to the first deployment. In turn, vehicles are in service for decades before they need repairs and upgrades.