On 19 January, the Berlin Libya Conference brought together the parties committed to step-up the EU’s efforts to enforce the UN arms embargo on Libya established by the UN Security Council Resolutions UNSCR 1970 in 2011, and extended with the UNSCR 2292 in 2016 and the UNSCR 2473 in 2019. Finally, on the 31 March 2020, after two and a half months of intra-European wrangling and arguing, the EU Council launched Operation EUNAVFOR MED IRINI. (Greek name for “peace”) and officially terminated the EUNAVFOR MED Sophia.

EUNAVFOR MED IRINI hosts also a Crime Information Cell (CIC) comprising staff from mainly the Italian Carabinieri and law enforcement authorities of Member States and EU agencies. This cell facilitates the receipt, collection and transmission of information on the arms embargo, the illegal exports of petroleum from Libya and on human smuggling and trafficking, as well as crimes relevant to the security of the operation.

On 28 April, the initial Force Generation Conference ended and Operation IRINI was able to start the planning of its ‘at sea’ operations. The maritime part of the operation commenced on 4 May with the arrival ‘on station’ of the French destroyer FS JEAN BART and a Fairchild MERLIN IVC patrol aircraft from Luxembourg, soon followed by a Polish B- 28B1R Antonov BRYZA and a German P-3C ORION. The air assets operate from the Sigonella Air Base in Sicily and on 4 June, the Greek frigate SPETSAI joined the Operation with the FS JEAN BART detached from the operation on 27 May.

Initially, Operation IRINI faced some criticism. Several member states were worried that the EU’s renewed naval presence could become a ‘pull’ factor with immigrants, leading to a renewed increase of illegal migration across the Mediterranean, as its vessels could be used to rescue migrants. Other member states did not agree with the procedures for the disembarkation of migrants and port diversions. In early May, Malta announced that it was no longer going to commit any military assets and threatened to use its veto to terminate the mission, but eventually, a consensus was reached. 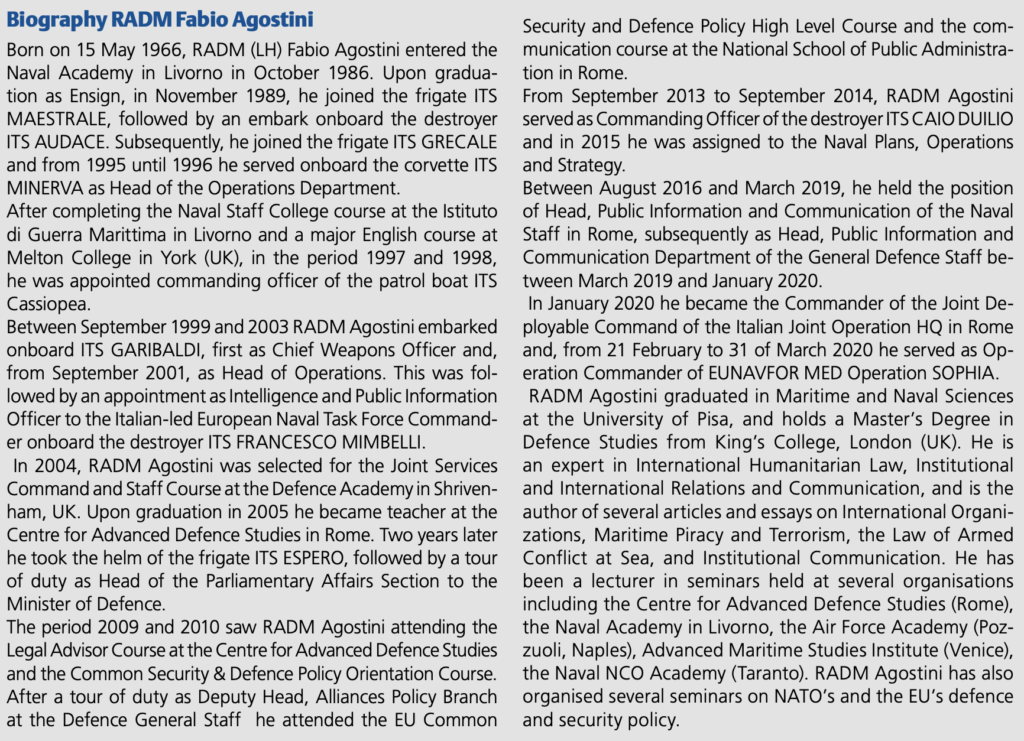 ESD: Admiral Agostini, how did you prepare yourself to take command of Operation IRINI? I dare suppose that your appointment as Operation Commander of Operation SOPHIA from 21 February to 31 March 2020 served as a good introduction on how to handle this new operation?
RADM Agostini: Indeed, being in charge of Operation SOPHIA proved very useful. Obviously I could profit from the operational benefits and experiences gained, allowing a seamless handover and ensuring an operational continuity. I would like to point out that Operation SOPHIA was the first naval EU Operation in the central Mediterranean and tested the collaboration with other organisations such as Frontex, EUROPOL, UN Agencies and the Italian Direzione Nazionale Anti-Mafia.

ESD: What are the differences between both operations?
RADM Agostini: Operation IRINI and Operation SOPHIA are two distinctive operations. Although the Area of Operation (AOO) is almost the same, their mandates and operational objectives differ. Whereas SOPHIA focused on combatting migrant smuggling, IRINI is primarily intended to implement the UNSRs arms embargo. The operation’s secondary tasks include the monitoring and gathering of information on illicit exports from Libya of petroleum, crude oil and refined petroleum products; assist in the capacity building of the Libyan Navy and Coast Guard in law enforcement tasks; and contribute to the disruption of the business model of human trafficking networks.

ESD: What is a normal working day for you, and your staff?
RADM Agostini: Our headquarters in Rome works 24/7. Personally I start very early in the morning, checking emails and messages on our classified networks, and then attend the Morning Staff Briefing for an update on what happened overnight. Throughout the day we follow the ongoing activities, look at the daily situation reports and the schedules for air, surface and submarine operations. I am also in constant touch with the Force Commander, Rear Admiral Ettore Socci and I have regular secure chats and routine VTC- meetings. The European Union Satellite Centre (SATCEN ) provides us satellite and aerial imagery. All this allows us to compile a comprehensive picture of the daily activities in the Mediterranean, almost in real time. When requested or needed, I fly to Brussels to update the relevant Committees about the operation.

ESD: Can you provide us some details about the organisation of your staff and what assets are assigned to the operation, or scheduled to join?
RADM Agostini: My 150-strong staff is made up of Navy, Air Force and Army personnel from 20 Member States. My deputy is  French RADM Jean-Michel Martinet and my Chief of Staff is Greek, Commodore Theodoros Mikropoulos. The IRINI Force Commander and the flagship are to alternate between Italy and Greece every six months. The current commander is the Italian RADM Ettore Socci who, since June 2019, was the Force Commander of Operation SOPHIA. He will remain in command until 18 October 2020 after which Commodore Mikropoulos will take the helm.

With regard to the assets continuously assigned to the operation, here is the situation as of 19 August. We have the Landing Platform Dock ITS SAN GIORGIO, assuming the role of flagship, the Greek frigate SPETSAI has just left the operation, but will be replaced soon by another Greek ship and Germany has just given us the frigate HAMBURG. We have two Maritime Patrol Aircraft (MPA): a SW3 MERLIN III aircraft from Luxembourg and a Polish B28B1R Antonov BRYZA, the German P-3C ORION has just left. The ITS SAN GIORGIO carries an EH101 helicopter and a boarding team from the San Marco Battalion. In addition, Italy is providing an Unmanned Aerial Vehicle (UAV). Occasionally, an ATR 72 MPA, a Gulfstream G550 Air Early Warning (AEW) aircraft and a submarine are made available. A French MPA and a Greek AEW aircraft are available two days per month. In addition, a number of vessels in associated support are provided by France, Greece and Italy.

ESD: Can you give us some statistics since the start of the operation?
RADM Agostini: Since the start of IRINI there have been 500 hailings [as of 19 August – Ed.] of which more than 400 in relation with the arms embargo and 49 related to violations on oil smuggling. We conducted five boardings concerning the arms embargo and two connected to oil smuggling. Furthermore we detected flight patterns of military planes arriving in Libya.

ESD: I suppose that you would like to see more resources being thrown in, such as additional ships, MPAs and drones?
RADM Agostini: Launching at the height of the COVID-19 pandemic obviously slowed down the force generation process. Nonetheless, almost all member states made efforts to contribute to the operation, either through active support (personnel, assets and intelligence), or with standby assets. More assets should be made available though.

We are doing our utmost with the assets currently available. However, we can only achieve our tasks in an effective manner when there is a continuous availability of sufficient assets, in particular air defence warships, AEW aircraft, as well as air-to-ground surveillance assets such as drones. Assets such as the French air defence destroyer FS JEAN BART are particularly valuable as they can monitor both the sea lines of communication and air traffic flow.

ESD: What about the collaboration with NATO?
RADM Agostini: The EU and NATO are used to working together closely. Operation SOPHIA and NATO’s Operation SEA GUARDIAN cooperated effectively. Currently, discussions are underway to establish a similar arrangement for cooperation between Operation IRINI and the NATO operation.

ESD: What can Operation Irini do against a suspect vessel?
RADM Agostini: On 5 June, the UN Security Council adopted Resolution 2526 (2020) that extends the authorisation to inspect vessels on the high seas off the coast of Libya which are suspected of violating the Libya arms embargo. We can implement the embargo by a Maritime Interdiction Operation (MIO) and by monitoring both aerial and land routes.

ESD: As you mentioned before, Operation IRINI was launched amidst the COVID-19 pandemic. What is the impact on your operation? How you handle the corona crisis ?
RADM Agostini: The COVID pandemic has obliged us to take, both internal and external, preventive and containment measures in order to reduce the risk of contagion. We issued dedicated documents, called Standard Operating Procedures (STANOPS) to deal with the necessary anti-COVID measures. In our HQ, social distancing is practised, with remote working and constant personnel education applied. All staff members have followed the compulsory COVID course through videoconferences and there is a thermo-scanner at the entrance and nobody is allowed to enter the building with a temperature of more than 37.5° or without a mask.

ESD: What if any of the ships take refugees onboard who could be carriers of the Corona-virus?
RADM Agostini: Although not part of our mandate, Search and Rescue (SAR) operations remain an international obligation. All ships must render assistance to those in peril at sea.

Should any of the ships be involved in such incidents, arrangements are in place to carry out it as effectively as possible and to bring the rescued people to a EU member State. In case the ships have to take refugees onboard, we have specific procedures, in line with WHO and EU rules, to avoid the risk of contagion for the crews. Each ship in IRINI has all the necessary materials onboard to avoid contagion.

ESD: Although this operation is an effective tool to implement the arms embargo, it only addresses the symptoms. What could be done to better or differently manage these problems?
RADM Agostini: IRINI was conceived to assist diplomatic efforts through the application of an arms embargo with the aim to facilitate a permanent ceasefire. I am aware that there are many political and diplomatic difficulties, especially due to the many international players involved, each with their own agenda. Beyond what the goals of individual nations are, a stable Libya should be everyone’s objective, because it will increase regional security.

The EU High Representative for Foreign Affairs & Security Policy and Vice-President of the EU Commission, Joseph Borell, underlined that EUNAVFOR MED IRINI is an important part of the solution to the Libyan crisis, but certainly not the solution to all the problems.

ESD: According to your experience, what are this operation’s strengths, and weaknesses, if any? Which aspects you feel should be objective of greater attention?
RADM Agostini: I am aware that there are many political and diplomatic difficulties, especially due to the many international players. To achieve results it is necessary that the political will demonstrated in launching the operation is translated into more concrete contributions to Operation IRINI.

ESD: How do you see the Operation evolve, both in the short and long term?
RADM Agostini: Despite the few assets currently available, IRINI already showed that we can achieve results in an effective, impartial and balanced manner. I am confident that with further assets Operation IRINI will be even more effective. Obviously this is not a short process and will take some time. The EU’s involvement is indispensable as it remains the only regional broker willing to monitor and enforce the arms embargo.

ESD: What is the biggest challenge being in command of Operation IRINII?
RADM Agostini: It goes without saying that I am honored to be entrusted this important, yet demanding and complex task. This is quite a challenge. Operation IRINI has an ambitious mandate but also a noble and absolutely fundamental objective for the security of the Mediterranean and the control of the southern border of Europe, to contribute to the EU’s efforts for the peace process in Libya.

ESD: Is there anything that “keeps you awake at night?
RADM Agostini: When I go home in the evening after at least 12 hours of work,
I am quite tired and after having had dinner with my wife, I fall asleep easily.

The interview was conducted by Guy Toremans, a naval specialist and frequent contributor to ESD.

If you have questions regarding your subscription of “European Security & Defence“, “Europäische Sicherheit & Technik“, “MarineForum” or “Mittler-Brief” contact our subscriber service: