The Royal Navy has announced that it has commissioned its fifth ASTUTE class hunter-killer submarine, HMS ANSON, into service during a ceremony at BAE Systems’ yard at Barrow-in-Furness. The vessel joins the other submarines of its class – HMS ASTUTE, AMBUSH, ARTFUL, and AUDACIOUS in service.

According to the Royal Navy, the ANSON is due to remain in Barrow-in-Furness for several more weeks undergoing final checks, tests and tweaks to her system before she sails for her future home at HM Naval Base Clyde in Faslane, Scotland,where she will then prepare for sea trials.

The Navy stated that it has taken more than 11 years for the 8,000-tonne boat to be ready for action, at a cost of £1.3Bn. ANSON was officially named in December 2020, and in April 2021 she was and rolled out of the Devonshire Dock Hall and lowered into Wet Dock. Since then, engineers and crew have been working on her systems and testing equipment. In February 2022, the boat conducted a dive in Barrow-in-Furness to ensure the dive/surface systems, ballast tanks, depth sensors and sonars were in full working order and that ANSON was accurately balanced and stable when submerged.

The vessel is armed with a combination of up to 38 SPEARFISH torpedoes and TOMAHAWK Block V cruise missiles, enabling the engagement of enemy ships, submarines, as well as land targets up to 1,609 km away. The boat is also capable of undertaking launch and recovery operations for Royal Marines raiding and reconnaissance teams. 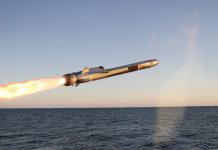