On 3 November 2022, Leonardo announced that their Marlin 40 naval remote weapon station (RWS) has been selected to equip two Indonesian Navy PC60 fast patrol boats under construction at PT Caputra Mitra Sejati shipyard. This follows Indonesia’s 2021 purchase of four Marlin 40 systems to equip two PC60 vessels and two Teluk Bintuni-class tank landing ships (LSTs). Both PC60 and LST will be equipped with the Marlin 40 Independent Line of Sight (ILOS) variant. Further PC60 and LST vessels are expected to be built by Indonesian shipyards for the Navy.

The Marlin 40 remote turret is lightweight, compact and digitised remote weapon station. Its relatively low size and weight allows it to be integrated onto smaller naval platforms as a primary or secondary weapon system. Marlin 40 is armed with the Leonardo 40L70 automatic cannon (Derived from Bofors’ 40L70), which has an effective range of over 4 km, and is capable of engaging aerial or surface targets. The RWS is ITAR-free and according to Leonardo it can be integrated with all currently-available naval Combat Management Systems (CMS).

The ILOS variant of Marlin 40 chosen by the Indonesian Navy can operate autonomously via a local control console, which processes the targeting data received from the turret’s own optoelectronic sight, as well as external fire control systems and ship’s data, thereby assisting with precision while incorporating a level of redundancy. The optoelectronic sight is equipped with a day camera, an Infrared (IR) camera, and a laser range finder. The sight is capable of traversing independently of the armament, to provide a panoramic surveillance capability. 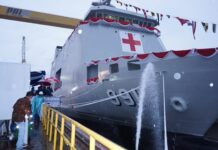