On 10 November 2022, Elettronica, an Italian company specialising in electronic warfare, announced that they had signed a contract to supply its Naval Radar Electronic Counter-Measures (RECM) jamming systems for the Indonesian Navy. The Elettronica RECM is due to be fitted to two Indonesian Navy 90 m Offshore Patrol Vessels (OPVs) currently under construction at PT Daya Radar Utama shipyard, as well as any further 90 m OPVs which may be contracted in future.

The RECM system selected by the Indonesian Navy is ITAR-free, and is fitted with two JASS (Jamming Antenna Sub System), each of which covers a different sector. The RECM is fitted with a powerful Active Electronically Scanned Array (AESA) transmitter to provide naval platforms with electronic defence. The jamming signals are generated by countermeasure programs which are automatically and adaptively selected to protect the vessel against both radar-guided missile attacks and long-range radar systems.

The company stated that the RECM’s modular design permits adaptation of the system configuration to individual ship classes. Additionally, the system can operate in conjunction with other onboard EW sensors or effectors, and can be integrated with all currently available naval Combat Management Systems (CMS).

Elettronica stated that this contract is their first with Indonesia, a key market for the company, which aims to expand its footprint in South-East Asia. For the 90 m OPV contract, Indonesia has also selected other Italian-built components, most notably the Leonardo 76/62 Super Rapid (SR) 76 mm deck gun. 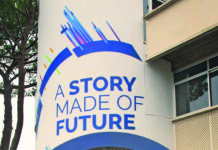 “A Story Made of Future” 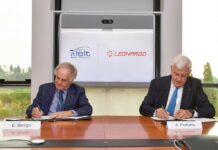 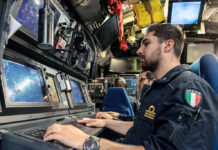 Elettronica to Provide U212 NFS EWS