India has walked a long and difficult road towards its goal of becoming a major arms exporter. Having spent many years fostering its domestic defence industry, India is finally showing signs that it is becoming ready to compete.

In late September 2022, Indian local press reported that the country secured a contract worth USD 250 million for arms and ammunition, including four batteries of the PINAKA 214 mm multiple rocket launcher (MRL) system, from Armenia, currently engaged in a stand-off with its neighbour Azerbaijan. Under current plans, India is due to commence deliveries of the PINAKA MRL to Armenia in the coming months. The deal is a key step forward for Indian arms exports, which are gradually inching closer towards their target of an arms export portfolio worth USD 5 billion per year by 2025, and therefore, to entry into an exclusive club of major arms exporters. Attaining this goal would also realise Prime Minister Narendra Modi’s vision of a ‘New India’ that not only caters to its own needs, but is also capable of fulfilling international requirements.

Recently, India’s Defence Minister Rajnath Singh called upon the Indian defence industry to identify and manufacture state-of-the-art cost-effective products and technologies fit for exports, stressing that, “Seven-eight years ago, our defence exports were not even USD 122 million. They have now crossed USD 1.6 billion. We have set a target of USD 21.5 billion of defence production by 2025, which includes exports worth USD 5 billion.”
Going by the Stockholm International Peace Research Institute’s (SIPRI) 2021 report on Trends in International Arms Transfers, India, alongside Saudi Arabia, emerged as the largest arms importer between 2017 and 2021, with both countries together accounting for 11% of all global arms sales. SIPRI’s report also highlighted that, world military spending had exceeded USD 2 trillion for the first time.

The USD 250 million deal for PINAKA rocket artillery systems was finalised after a high level Armenian defence delegation visit to New Delhi in June 2022. This is not the first time India has supplied military hardware to Armenia. In 2020, during the conflict with Azerbaijan in Nagorno-Karabakh, Yerevan signed a deal worth USD 40 million for four Indian SWATHI fire finding radars. SWATHI radars are capable of detecting and tracking incoming rockets, artillery shells, and mortar bombs, and identifying likely fire positions. SWATHI radars are in service with India, where they are primarily deployed at the India-Pakistan and India-China borders.

The PINAKA MRL is fully domestically-developed, designed by India’s state-owned agency Defence Research and Development Organisation (DRDO), and jointly developed by the DRDO laboratories – Armament Research and Development Establishment (ARDE) and High Energy Materials Research Laboratory (HEMRL). The system has been in service with the Indian Army for almost a decade, and is deployed at India’s eastern and western borders. Developmental work on the system continues, with in the DRDO and Indian Army having successfully tested the PINAKA Extended Range (PINAKA-ER), Area Denial Munitions (ADM) and indigenously-developed fuzes, in December 2021 at the Pokhran test range.

A PINAKA Mk-I battery comprises six launchers, six transloaders, six ammunition transport vehicles, along with two vehicles to carry the command post, and one meteorological radar vehicle. A PINAKA rocket is 214 mm in diameter and carries a warhead weighing 100 kg. It is also capable of being equipped with cluster munitions such as high explosive submunitions and anti-tank mines. A battery can launch all 72 ready missiles in 44 seconds, covering an area of approximately 1 km2 at ranges out to 40 km. The vehicles are fitted with a networked fire control system which allows them to receive targeting cues from the command post. The follow-on variant PINAKA Mk-II is capable of engaging targets at ranges 60–75 km, depending on the munitions used, and entered user trials earlier in 2022.

Aside from PINAKA, Armenia also has expressed interest in other Indian weaponry, including like anti-tank guided missiles, the Indo-Russian BRAHMOS supersonic cruise missile, Indo-Israeli BARAK 8 surface-to-air missile (SAM) system, TAPAS-BH-201 (also known as Rustom-II) strike UAVs, and various other armaments. In this vein, there are reports that a deal regarding the provision of Man Portable Anti-Tank Guided Missile (MPATGM) for Armenia could be concluded soon. The MPATGM, was successfully tested by the DRDO in January 2022, it has a maximum range of 2.5 km and uses an imaging infrared (IIR) homing guidance system. In terms of air defence, India’s AKASH is also being considered as a means of protecting Armenian forces against Azeri BAYRAKTAR TB2 UAVs.
It is worth noting that, Azerbaijan, also an ex-Soviet Republic, is being aided by Turkey against Armenia through the BAYRAKTAR TB2 UAVs, which were recently denied sale to India by Ankara. The emerging axis of Turkey-Azerbaijan-Pakistan, who often call themselves the ‘three brothers’, have repeatedly held an anti-India stance on Kashmir. Geopolitically, it makes sense for New Delhi to sell weapons to Armenia, who has traditionally used Russian weaponry, but due to the ongoing Ukraine-Russia conflict, Moscow is stretched too thin to sustain Yerevan militarily, thereby creating an opportunity for Indian arms sales.

Jayant D. Patil, Member, Executive Council of Management, Larsen & Toubro Ltd. Says, “[the] export sale of PINAKA is a good development for India. It’s a mature indigenously developed weapon system and must be logically exported to those countries India believes are India’s friends, and where there is little chance of [its] use against Indian forces ever.”

The Gradual Expansion of India’s Reach

After opening up to arms exports more than a decade ago, India has had a mixed experience with a number of countries, but more recently the trajectory seems to be on an upward trend.

India’s first major export contract of defence equipment, which concluded in the 2000s with much fanfare, unfortunately did not get very far. The USD 45.2 million deal to supply Ecuador with seven DHRUV helicopters developed by the state-owned Hindustan Aeronautics Limited (HAL), dashed the hopes of New Delhi following four of the helicopters crashing shortly after entering service. The deal, consisted of two batches, with five DHRUVs delivered in 2009 and the remaining two in 2011. Although deliveries were completed, the sustainment contract with HAL was ended unilaterally by Ecuador in October 2015, following the four accidents. Ecuador then attempted to sell off its remaining DHRUVs, but it has not been confirmed whether it succeeded.

In January 2022, India and the Philippines finalised a contract for the sale of three batteries of the Indo-Russian BrahMos cruise missile under a government-to-government deal valued at USD 375 million, thereby making Manila the first foreign customer of the supersonic missile. The missiles have a range of over 300 km, and are due to be operated by the Philippine Marine Coastal Defense Regiment.

Vietnam has been in talks with India since 2017 for the supply of the AKASH NG SAM system to replace its ageing Soviet-era S-125/S-75 surface-to-air missile systems. The AKASH-NG missile has an increased range of over 50 km, compared to the earlier variant’s 25 km. In June 2022 during Defence Minister Rajnath Singh’s Vietnam visit, Hanoi was offered a USD 500 million line of credit under which India offered AKASH air defence systems, BRAHMOS supersonic cruise missiles, coastal radars and VARUNASTRA heavy torpedoes. Hanoi has requested technology transfer and joint production of the AKASH system through a local production line in Vietnam.

To keep the momentum going, after securing the Philippines’ BRAHMOS order, New Delhi is hopeful for the same with Vietnam, as arms sales to Southeast Asian nations seems to serve New Delhi the twin purpose of bolstering its domestic defence industry as well as potentially imposing greater challenges for Chinese activity in the region.

In 2013 a line of credit valued at USD 100 million was concluded between both countries, under which 12 offshore high-speed patrol boats for the Vietnamese navy built by Larsen & Toubro (L&T) have recently been delivered. Vietnam is also reportedly in talks with Israel to obtain the Indo-Israeli BARAK-8 air defence system, which has been reported to possess an effective range of 70 km.

In March 2017, India finalised a deal worth USD 37.9 million with Myanmar for the sale of lightweight torpedoes.

In September 2017, India’s state-owned Ordnance Factory Board (OFB) secured a USD 40 million order from the UAE for the supply of 40,000 rounds for 155 mm artillery. This was followed by a second order in August 2019 for another 50,000 such rounds.
Easing Restrictions

The present Indian Government is aiming to raise the country’s GDP to USD 5 trillion and create an ‘Aatmanirbhar Bharat’ (ENG: Self-Reliant India). In line with this goal, the government has liberalised various with the aim of increasing the ease of doing business, and consequently has increased India’s defence exports. According to Defence Minister Singh’s statement in Parliament there has been a increase in defence exports of 700% in just two years, with Singh stating “The export authorisation went up from USD 213 million in 2016–17 to USD 1.5 billion in 2018-19. SIPRI has noted that three Indian companies that rank among the top-100 defence companies, are HAL, OFB, and Bharat Electronics Limited, which account for 1.2% of the [total] defence exports of the top-100.”

Junior Defence Minister Ajay Bhatt has reiterated that in order to achieve the annual export target of USD 5 billion by 2025, various reforms by the Government have been put in place such as grouping the 41 OFB factories into just seven public sector units.

Further constructive include enhancing private sector participation by earmarking 68% of the procurement budget for domestic industry in 2022-23, of which, 25% would be for the private sector and start-ups, paving the way for innovation and encouraging strategic partnerships. 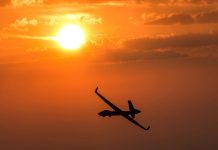 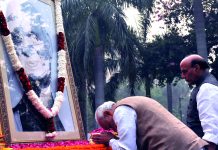 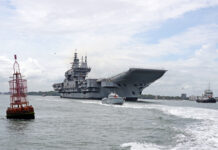 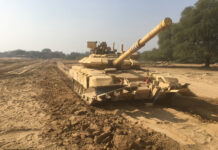 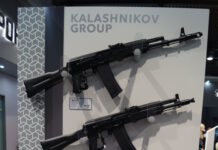 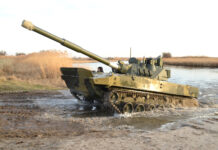 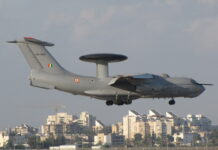 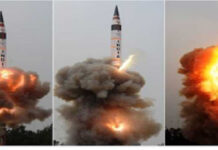