In what is being seen as the first major Foreign Military Sales (FMS) deal between the United States and Pakistan since 2018, when the Trump administration halted aid to Islamabad, the recently announced USD 450 million deal for F-16s to Pakistan has annoyed India for a variety of reasons. The Pentagon has defended the Biden administration’s move by terming the package as “sustainment and equipment related” for the Pakistan Air Force’s (PAF) fleet of approximately 75 jets. The timing of the deal announcement is significant as it precedes the Pakistani Army Chief’s US visit.

The Pentagon sees the deal as remuneration for Pakistan’s ammunition supply to Ukraine in the ongoing Ukraine-Russia conflict, however the massive F-16 sustainment package is also being viewed by strategic watchers as a prelude to de-listing Pakistan from the Financial Action Task Force (FATF) grey list.

India has been quick to register strong protests on grounds that the upgraded fighters might be used against India. Indian Defence and External Affairs Ministers have voiced their concerns, recalling an incident on 27 February 2019, where PAF F-16s conducted air strikes in Jammu and Kashmir. The brief skirmish resulted in the loss of an Indian Air Force (IAF) MiG-21, and the claimed downing of a PAF F-16 during an aerial engagement between the two sides. India claimed the PAF F-16 was downed by an IAF MiG-21 piloted by Wing Commander Abhinandan Varthaman in an engagement along the India-Pakistan Line of Control (LoC). It is Interesting to note that Lockheed Martin, the manufacturers of the F-16, rechristened the fighter to F-21 and offered it to India days after this incident, at the 2019 Aero-India air show.

Washington’s justification was voiced by US Secretary of State Antony Blinken, “These are not new planes, new systems, new weapons. It’s sustaining what they have. We have a responsibility and an obligation to whomever we provide military equipment to make sure that it’s maintained and sustained.” The official Pentagon statement added, “This will sustain Islamabad’s capability to meet the current and future counterterrorism threats by maintaining its F-16 fleet as well as support American foreign policy and national security.”

A retort for the above claims came from the Indian External Affairs Minister Dr S Jaishankar during his Washington visit: “For someone to say I am doing this because it is all counter-terrorism content and so when you are talking of an aircraft like… [the] F-16 where everybody knows, you know where they are deployed and their use. You are not fooling anybody by saying these things.”

The F-16s were originally sold to Pakistan to act as a deterrent between the two nuclear-armed neighbours, but further sales of additional F-16s were suspended by the US following the 1998 nuclear tests done by Islamabad. This decision was revised in July 2006 when the US House Committee for Military Affairs was informed of a resumption of F-16 sales to Pakistan, but with stringent conditions attached. The George W Bush administration provided assurances to New Delhi that there was a monitoring system on the end-use and deployment of these fighters.

In 2006, a contract was signed for the delivery of 18 new F-16C/D Block 50/52 aircraft to the PAF. According to a 2008 communiqué by Anne Patterson, the US Ambassador to Pakistan, obtained through Wikileaks, Pakistan’s F-16 purchase was justified as a means of bolstering Islamabad’s counter-terrorism efforts in the region. According to three Letters of Acceptance (LoA) disclosed in front of the House Committee on Foreign Affairs, the first letter talks about the 2006 contract for 18 F-16s, the second one about provision of advanced munitions such as 500 AIM-120-C5 Advanced Medium Range Air-to-Air Missiles (AMRAAMs), 700 BLU-109 penetration bombs and 750 Mark 84 2,000 lb general purpose bombs, while the third pertained to mid-life upgrade of the older fleet. Although Pakistan managed to secure the batch of 18 F-16s, by 2016 New Delhi successfully lobbied the Obama administration to block the sale of an additional eight F-16s to Islamabad.

Following the 27 February 2019 incident, a damaged portion of one of these AMRAAMs was recovered and displayed as evidence by the IAF. The IAF said in a statement regarding the engagement, “Multiple launches of AMRAAM were conclusively observed. Prompt and correct tactical action by Su-30 aircraft, in response to [the] AMRAAM launch, defeated the missile. Parts of the missile fell in an area east of Rajouri in [Jammu and Kashmir], injuring a civilian on ground.” New Delhi was quick to follow up with the Donald Trump administration, arguing that the usage of F-16s and AMRAAMs was in violation of Pakistan’s end-user conditions.
As such, India remains suspicious of the latest deal, with IAF’s Air Marshal B Suresh (retd) stating: “The F-16s are being refurbished and most certainly they will be used against India if the need arises. They will use these aircraft across the entire Western front, as seen during post-Balakot action.” 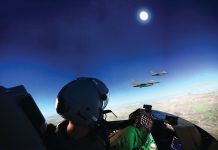 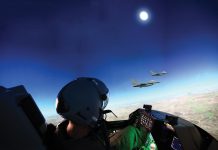 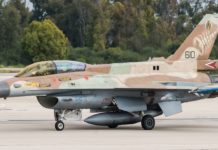 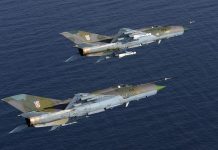