The future of the EUROFIGHTER TYPHOON rests on four pillars: modernisation of the aircraft; expected contracts from two core nations in the programme (Germany and Spain); deliveries to Qatar and Kuwait which will keep the production lines open at least until 2024; and the ongoing export campaigns with Switzerland and Finland as main targets.

Our core nations have acknowledged the advantages of an integrated fleet concept by developing the EUROFIGHTER in line with the evolving threats as well as future newly introduced systems. From industry side we are supporting this effort by ensuring the latest technology makes its way into the EUROFIGHTER, and that in turn will allow it to maintain its superior position vs today’s and tomorrow’s threats”, an Airbus Defence and Space source told ESD.

The goal of the phased enhancements is to ensure the superiority of the EUROFIGHTER by addressing four different yet complementary aspects:

The Phase 2 Enhancements are entering into service which include capabilities like the fully digital integration of the air-to-air METEOR or the air-to-ground STORM SHADOW missiles.

The engineering departments are currently working on the Phase 3 Enhancements which as a highlight features the integration of the air-to-ground BRIMSTONE 2 precision missile and the new E-Scan Radar, which brings in a new era when it comes to sensor capability.

Airbus DS wants to introduce the E-Scan Radar Mk1 in part of the T2 and the entire T3 fleets of Germany and Spain starting in 2022. This adaptation will imply improvements in: multiple and simultaneous air-to-air and air-to-ground threat detection, attack and identification; Synthetic Aperture Radar (SAR) modes; transmission of images; electromagnetic defensive measures; and integration of smart weapons.

The integration of the Mk1 E-Scan radar is a bi-national programme involving Spain and Germany to start in 2022 in the Luftwaffe fleet. It will bring a significant improvement in fast searching and tracking (longer range and wider field of regard) of multiple air and ground threats and will include electronic warfare functions.

Airbus DS and its industrial partners Leonardo and BAE Systems will also introduce significant enhancements to the DASS (Defensive Aids Sub-System) and the most modern Targeting Pods LITENING IV and SNIPER.

“The E-SCAN Mk1 programme provides Germany & Spain full national radar sovereignty in system and equipment”, said Kurt Rossner, Head of Combat Aircraft Systems, during a media event in 2019. “Our mission is to enable the retrofit and upgrade of up to: 110 Tranche 2/3 German aircraft starting in the second quarter of 2022, and 19 Tranche 3 Spanish aircraft starting in the third quarter of 2022”, he added.

Regarding the E-Scan radar, on 25 June 2020, Airbus was awarded a contract for the development, supply and integration of 115 EUROFIGHTER E-Scan radars for the German and Spanish EUROFIGHTER fleets.

This marks the largest order to date for the world’s most modern electronically scanned array radar, CAPTOR-E. The contract signature followed the approval by both governments in recent weeks.

The contract foresees the delivery and integration of 110 CAPTOR-E radars for Germany and an initial batch of five radars for Spain to be delivered by 2023. The new sensor will equip Tranche 2 and Tranche 3 EUROFIGHTERs, as well as new aircraft. Whereas the Airbus sites in Manching, Germany and Getafe, Spain, will act as overall integration hubs, the development and building of the radar will be subcontracted to a consortium under the leadership of Hensoldt and Indra with participation of further EUROFIGHTER partner companies.

“The contract for the CAPTOR-E radar is a main achievement to equip the EUROFIGHTER with sensors that ensure today’s dominance of the aircraft, also taking into account the threat scenarios of tomorrow,” said Dirk Hoke, CEO of Airbus Defence and Space. “With the EUROFIGHTER, Germany and Spain are investing in a strong backbone of European air defence and in the leading project of the European defence industry.”

This retrofit programme will pave the way for the Long Term Evolution (LTE) until the arrival of the Future Combat Air System and Electronic Warfare capabilities. This is one of the key questions why it is so important for Airbus DS and the partner companies. In May 2019, EUROFIGHTER, Eurojet Turbo and NETMA (NATO EUROFIGHTER and Tornado Management Agency) signed contracts worth a total of €53.7M to initiate the studies and risk reduction phase of the LTE for the EUROFIGHTER.

Part of this upgrade is the “Quadriga” project that will replace the German Tranche 1 Fleet. This initiative of the German MoD will produce 38 new EUROFIGHTERs (7 Twin Seater / 26 Single Seater + 5 Single Seater optional). The aircraft standard shall include the Mk1 E-SCAN Radar including a new multichannel receiver.

“With the introduction and embodiment of the E-Scan Mk I (and Mk II) TYPHOON AESA Radar systems the sensor and task management requirements of future battle space connected operations are one significant step closer to being met. To keep up with the pace of change it is paramount to introduce operational changes quicker and independent from safety related system modifications that are bound by regulatory rules. Application and software-based capability insertion will enhance speed and ease of upgrades. A task-based mission system architecture will facilitate this further”, an Airbus DS spokesperson explained.

As part of this roadmap, “we are already looking at the next enhancement packages, with Phase 4 Enhancements (P4E) being currently in definition, aiming to expand the spectrum for the current operational roles as well as enabling new ones, such as SEAD/DEAD missions (Suppression/Destruction of Enemy Air Defence).

P4E will, however, probably be the last traditional enhancement package prior to LTE: “We are likely to see a paradigm shift in order to ensure compatibility with FCAS”. This requires different aspects: Wider waveband and more secure communication links, new missions/roles, increased range and persistence, higher survivability, and a higher speed of technology/capability introduction thanks to an open SW/modular Avionics Architecture.

“Likewise, without the possibility of leveraging mature LTE capabilities in EUROFIGHTER first, the Next Generation Weapon System (NGWS) development challenge will be greater in terms of technology maturation and certification with higher costs and the possible risk of obtaining a weapon system in 2040 that is less capable than desired”.

With the electromagnetic spectrum gaining more relevance, the ECR (Electronic Combat Role) will be an essential contribution to the future battlefield. This is part of a collaborative German industry approach under study. It will have the possibility to combine Escort and Stand-in Jammer roles.

With this P4E package to be complemented and augmented with LTE the EUROFIGHTER TYPHOON will be ready to seamlessly interoperate within the FCAS with the New Generation Fighter. Besides, the EUROFIGHTER TYPHOON LTE will be at first a test bed, maturing futuristic capabilities and finally will be a fundamental pillar in the future FCAS architecture.

On the British side, having delivered enhanced weapons capability as part of the Project CENTURION upgrade, BAE Systems is now looking at the next step in the TYPHOON’s capability evolution. “This will include investments in radar, communications, data management and connectivity which will ensure TYPHOON is future-proofed well in to the 2060s. Through its evolution, TYPHOON will be at the heart of developing and deploying technologies which will become part of a future combat air system, making it the perfect interoperable partner for Future Combat Air Systems”.

Expected Contracts in Germany and Spain

Apart from the Quadriga project to replace the German Tranche 1 Fleet of EUROFIGHTERs
with 38 new aircraft, the German MoD seeks to replace its ageing TORNADO fleet by 2030.

The German Minister of Defence, Annegret Kramp-Karrenbauer, has just proposed the purchase not only of 93 European EUROFIGHTER aircraft but also 45 American Boeing F/A-18E/F SUPER HORNETs/EA-18G GROWLERs, intended in particular to keep the NATO/DCA role of part of the German TORNADO fleet which can carry B-61 nuclear bombs. Neither EUROFIGHTERs nor F/A-18 E/F SH were originally designed for this strategic capability.

However, there is an arguable belief at the German MoD that such a new integration would be faster with the American fighter bomber than on EUROFIGHTER.

On the Spanish side, the Ejército del Aire will progressively replace 85 F-18 HORNET between 2025-2035. “The EUROFIGHTER is a solid candidate for the replacement of the F-18 deployed in Zaragoza, Madrid and Canary Islands”, a Spanish Air Force spokesperson said.

The final decision is also linked to the possibility of reinforcing the industrial capabilities of Airbus DS in Spain, starting with a first batch of 20 aircraft under the programme name of Halcon, replacing the ageing squadron of F-18 HORNETs in Gando Air Base (Canary Islands). Of course, for the subsequent batches there could be two other US-made candidates, the F-18 SUPER HORNET by Boeing and F-35 LIGHTNING II by Lockheed Martin.

Therefore, these two core nations of the programme have emerged as the next great opportunity for the EUROFIGHTER and for the enhancement of their current fleet: Germany (141) and Spain (70). Both countries have received their last T3 aircraft from the factories.

Deliveries to Qatar and Kuwait

In total, 623 EUROFIGHTER TYPHOON have been ordered: 160 aircraft for the UK, 143 for Germany, 96 for Italy, and 73 for Spain. Added to these are export orders amounting to 15 aircraft for Austria, 28 for Kuwait, 12 for Oman, 72 for Saudi Arabia, and 24 for Qatar. The deliveries for Kuwait and Qatar are especially important because they will allow the factories lines to remain open at least until 2024. This is essential to bridge the production until the new German and Spanish EUROFIGHTERs can be produced.

Under the deal, Kuwait will receive 22 single-seat and 6 twin-seat aircraft, which will be assembled in Italy by Leonardo. Kuwait is set to receive its first batch of EUROFIGHTER TYPHOON fighter jets in the fourth quarter of this year. This batch will include the CAPTOR E-Scan radar (part of P3Eb), the most advanced EUROFIGHTER ever delivered. The contract is worth US$8.7Bn.

On the other hand, Qatar signed with BAE Systems a US$6.8Bn deal for 24 EUROFIGHTER TYPHOON. The Qatar deal includes the supply of a weapons package covering MBDA-built BRIMSTONE 2 ground-to-air and METEOR beyond-visual-range air-to-air missiles as well as Raytheon’s PAVEWAY IV precision-guided bombs. The first of the 24 aircraft are expected to be delivered to Qatar in late 2022. 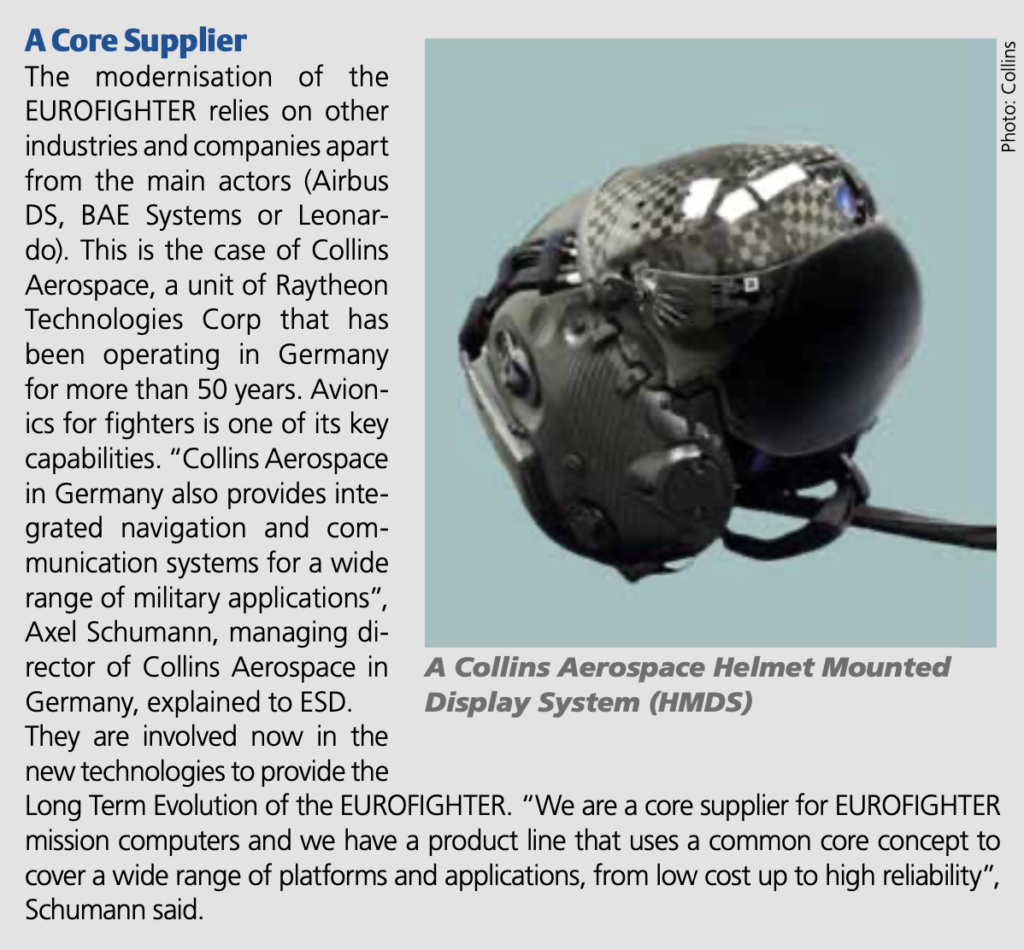 For Switzerland, Airbus Defence and Space proposed up to 40 EUROFIGHTER as replacements for the F/A-18 HORNET and F5 TIGER. The selection by the Federal Council is awaited for early 2021.

According to Kurt Rossner, Head of Combat Aircraft Systems, these 40 EUROFIGHTER for Switzerland would have identical configuration as German Quadriga project: “The joint procurement ensures economic benefits for Switzerland, too. EUROFIGHTER offers full autonomy in mission data and technology access for Switzerland. The EUROFIGHTER is an ideal platform for air policing requirements in challenging Swiss topography and airspace”. This is an export campaign led by Germany with Airbus DS.

As for Finland, in January 2020, the Finnish Air Force began the flight test evaluation of the EUROFIGHTER TYPHOON as part of the programme to replace the 55 Boeing F-18 HORNETs whose service life ends by 2030. This is an export campaign led by the UK with BAE Systems. Contenders to replace the F-18 fleet include Lockheed Martin F-35, Boeing F/A-18 SUPER HORNET, EUROFIGHTER TYPHOON, Dassault RAFALE and Saab GRIPEN.
A final decision is expected in 2021 with a contract valued at €10Bn.

And then there is Colombia. The Colombian Air Force needs to replace its 23 Israeli-built KFIR C-10/C-12/TC-12 multirole combat aircraft, in service since 1989. Bogotá has studied different options, including the GRIPEN NG and the F-16 Block 50. The EUROFIGHTER
TYPHOON consortium has also offered to sell 15 EUROFIGHTER Tranche 3 fighters (12 one-seat and 3 twin-seat) to Colombia. This is an export campaign led by Spain with
Airbus DS.

There is another option: the sale of 17 second-hand EUROFIGHTER Tranche 1 fighters from the Spanish Air Force that would later be modernised (to Tranche 2) by Airbus DS in Getafe (Madrid) factory to be used later by the Colombian Air Force.

Hartmann Electronic and W-IE-NE-R Power Electronic are proud to present our latest addition to the VPX power supply segment.

Collins Aerospace: Technologies for the New EUROFIGHTER and FCAS

“We are Europeans, so we trust ourselves”

A Long Life for the Spanish EUROFIGHTER

“We need a long-range artillery capability.”