On 30 August 2022, for the first time ever, the German Armed Forces fired a ship-based high-energy laser (HEL) weapon during tests, marking step forward toward the introduction of fully operational laser weapons. During the test, the German frigate Sachsen successfully engaged drones at short and very short ranges in the Baltic Sea near Putlos Training Area.

The laser weapon demonstrator was developed by the High-Energy Laser Naval Demonstrator working committee (ARGE), consisting of MBDA Deutschland GmbH and Rheinmetall Waffe Munition GmbH. The joint integration and test phase of the naval demonstrator started in November 2021 at Rheinmetall’s Unterlüß proving ground. The demonstrator was then installed onboard the frigate Sachsen in Kiel. In July 2022 the first series of tests took place in Eckernförde Bay. During the trials, the capabilities of various sensors, including the electro-optical sensor suite from the ARGE and the radar, were validated. In addition, the interplay between all the components and procedures in the entire operational sequence from target acquisition to engagement was put to the test in realistic engagement scenarios. The test campaign was carried out by the German procurement authority BAAINBw, and testing is due to continue until mid-2023. In subsequent tests, new scenarios will be used to challenge the demonstrator’s capabilities.

Future HEL weapon systems for the Navy will be useful in defending against drones and drone swarms as well as engaging speed boats at close and very close ranges. The system can also be designed for greater output, enabling it to destroy guided missiles and mortar rounds. 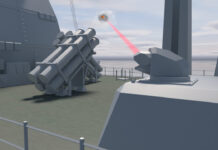