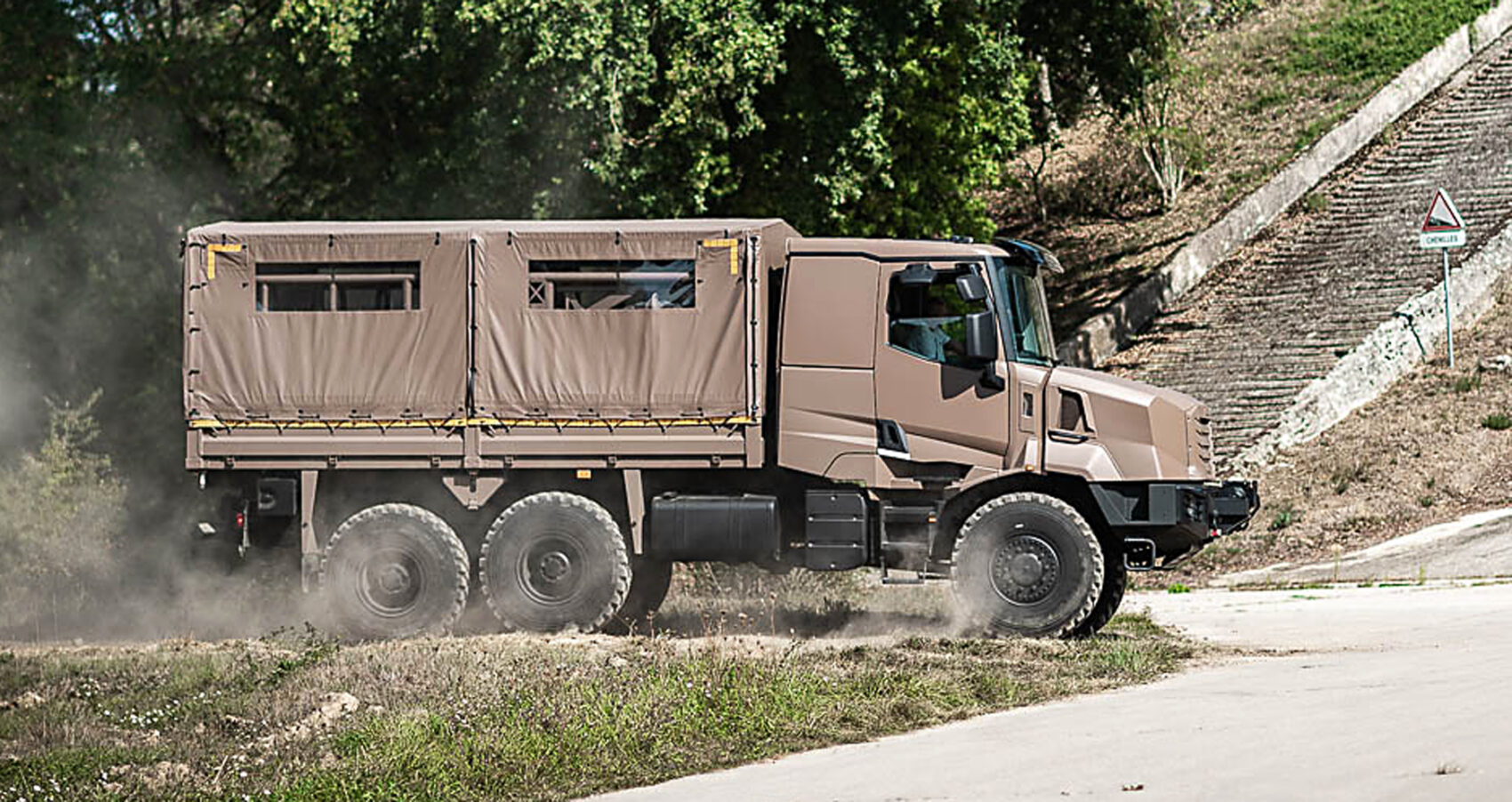 Arquus has presented examples from its vehicle range to customers and trade visitors, ranging from the AREG protected 4×4 vehicles (for special forces) and FORTRESS Mk2 (multi-purpose vehicle, racing in Poland) to the plug-in hybrid SCARABEE and the ARMIS 6×6 logistics trucks.

The ARMIS family includes a 4×4 and an 8×8 version, while the ARMIS in 6×6 configuration demonstrated its capabilities off-road and on steep tracks. The core of the ARMIS 6×6 is an 11-litre in-line diesel engine (Euro 5) from Volvo with 340 kW – similar to the engine in the JAGUAR reconnaissance vehicle – on a military specific hardened chassis. The transmission is equipped with an ultra-low crawler option, which enables safe stopping on slopes. To increase off-road capability, Automatic Traction Control (ATC) supports the use of differential locks, saving fuel and reducing the load on the running gear. In addition, the driver is assisted in driving the vehicle by numerous Advanced Driver Assistance Systems (ADAS) such as ABS/EBS and ESP.

The cabin, identical to the one on the ARMIS 8×8, is designed for a three-man crew and is equipped with mounts for weapons and personal equipment. The integration of communication equipment is prepared while displays for the Battlefield Management System and the control of a Remote Weapon Station are available. Although the cabin on display was unarmoured, there is a version with a STANAG 4569-compliant ballistic, mine- and IED-protected cabin.

The payload is four to eight tons, depending on the protection provided. The load floor can be configured for various tasks including a passenger transport unit with energy-absorbing seats for 16 passengers under a tarpaulin, while alternatives are a flatbed, shelters (10″ or 15″) or the use as a weapon carrier.

The ARMIS family was developed with the military requirements of the French armed forces in mind. It is expected that the requirements will be issued in early 2021 in preparation for a planned renewal of the fleet of logistics trucks. The modular design of the ARMIS vehicles offers the possibility to realise numerous features. These include integration into the SCORPION cloud, communication and information systems of the latest generation and equipment for various missions in areas of extreme climate conditions. Arquus sees potential for growth in remote operation, automation and energy optimisation as well as environmentally friendly versions to meet changing military requirements.

Maintenance under operating conditions was taken into account in the design of the new truck family. A high degree of commonality between the Group’s vehicles facilitates the creation and management of operational stocks and the training of maintenance personnel. The optional Health and Usage Monitoring Systems (HUMS) enables predictive maintenance and simplifies fleet management. Arquus has set up a network of maintenance and repair bases near the barracks, which already keeps more than 10,000 trucks ready for operation. For the VT4 multipurpose light vehicle, for example, Arquus guarantees an availability of 95 percent. The ARMIS trucks can be integrated into the system and benefit from the new Arquus logistics platform in Garchizy, which already stocks spare parts and assemblies for the GRIFFON and JAGUAR vehicles in the SCORPION range as well as for numerous other Arquus vehicles.